Through a neutral plan and the abstraction of the façades, the new Helsinki Central Library offers a complete openness towards the city and the park, interpreting and renovating the most striking feature of Helsinki’s urban structure: the continuous intertwining between the built environment and the natural landscape.
The building will not be stuck in one of present-day fashionable aesthetics but will embody timeless values. An open field of possibilities, it will be able to continuously update its content and to adapt its spaces to future needs.
Looking for a subtle dialogue with the important context, the volume’s stereometric nature underlines the linearity of the southern side of the park, while its transparency relates to the Sonoma building on its south side and the smaller volume of the Music Center on the west. The façade on the park mirrors the opposing Parliament building, dematerializing its strong column entrance through a light vertical steel structure.

The new Central Library is planned as an unhierarchical system, with no emphasis on a single side: it does not stand on a podium, its spaces flow in a perfect continuity with the city outside. Open, extremely clear and readable in its principles while revealing an interior complexity, the library is a world to discover, an infrastructure where to produce, access and share culture. Behind its planning lies the interpretation of the access to contemporary culture: horizontal and free, common and egalitarian. The project doesn’t share the idea that a complete indeterminacy of space will allow for a better housing of the program. We strongly believe that even in today’s dematerialising cultural universe the offer, the access and the production of information better occurs in a variety and a richness of spaces: from larger, collective gatherings of people to intimate, individual ambiences. To interpret this statement our project needs to convey a radical architectural approach through a simple but effective subdivision of the program into two categories: the flexible (open) surfaces, corresponding to a continuous plan, and the “interiors rooms” program, housing the functions that need more independence and autonomy, contained in smaller volumes scattered all over the plan. 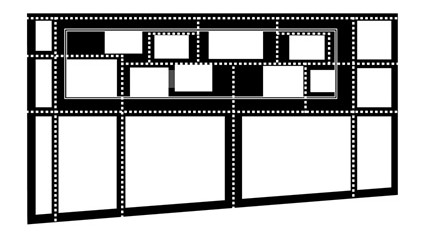 The most flexible and open areas, the lobbies and the collection, are articulated on a continuous plan, a flat field situated on the three overground floors. Their main character is their spatial and visual continuity, both on the inside and with the exterior environment. Large double heights distribute natural light across the building and allow views through the different floors. The collection area is conceived as a open platform but, at the same time, it is articulated in a high variety of unclosed sub-spaces characterized by different views and spatial sensations. The user is free to choose and personalize his/her own place to read, study, relax as the open plan guarantees an extreme spatial freedom according to the degree of looseness in its planning.

The steel structure of V-shaped pillars is concentrated in interior vertical elements which embodies rooms within rooms, more isolated areas inside the main continuous plateaux. Those rooms are superposed through the floors while slightly shrinking in size upward. They host on the ground floor those spaces which can work autonomously from the main building, like the café, the restaurant etc. and on the upper floors they integrate the teaching and meeting spaces as well as the personal office areas.
The superposed interior rooms become small towers inside the building, suggesting the construction of a city within a city where the open spaces in between, freed from the structure or from the service areas, are flexible and adaptable through time. This small cityscape included in a building becomes a unique reference point in the city: recognizable while not monumental, it provides a space which is between an interior and an exterior, mixing the feeling of continuity with the multiplicity of spaces.
On the higher level the rooms emerge as the top of the towers on an exterior terrace. This area becomes a living roof, an open air extension of the library that also hosts the sauna and (an extension of) the café. Working, studying and leisure mix together in a green environment. The terrace is open through protected from the wind by an exterior glass screen aligned with the main façade.

The double logic of towers and platforms meets the needs of the program while providing a clear organization for heating zones, acoustic levels, building’s structure and technical systems.

The continuity of the space makes it flow through the inside as an interior landscape where the relaxing areas are alternated with those for studying, working, meeting and can be rearranged through time.
The variety, in size and quality, of the spaces corresponds to a unity of language through the building: very simple glazing surfaces are alternated with translucent walls and mostly white partitions.The whole interiors are neutral surfaces adapted to relax and concentration which can become canvas for information boards, projections, posters, added when required.
The library collection areas, completely transparent and continuous, recall an exterior environment: the trees in the park outside are the main view, a living and evolving scenario for the activities.The structural elements with their recognizable shape are visible through the translucent walls and become a counterpoint to the exterior panorama, a sort of abstract interior forest.
A shadowing system is integrated in the façade double skin and is automatically activated following the needs.
Huge openings in the ceilings increase visual relationship through the floors letting the space be felt as a continuum through the volume. 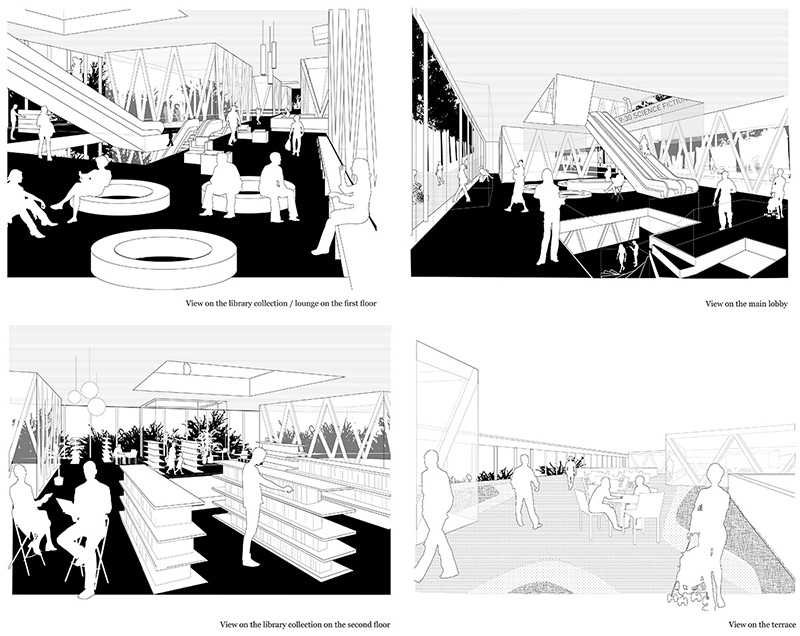 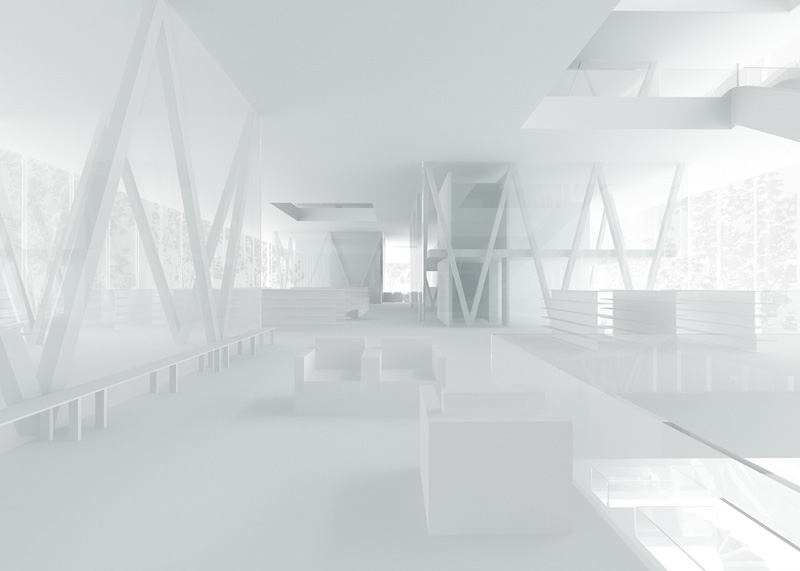 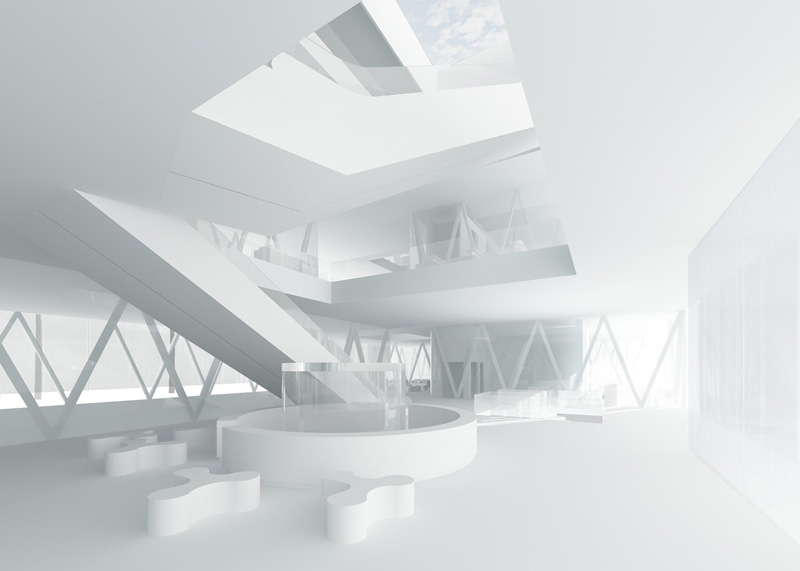 The loadbearing structure principles accompany the design choice to free the plateau spaces from structural elements, through concentrating them around the interiors volumes.
Every interior volume in every level acts as a four-sides Warren steel truss girder, each level supporting and working together with the upper levels with an increase in the number of diagonal elements (V joists of 20 to 40cm) on the ground floor and a decrease towards the upper floors.
The superposed truss girders act jointly as tridimensional pillars supporting the horizontal structure of the plateaus (in reinforced concrete).
In order to decrease the global weight of the horizontal structure, and in accordance with the reduction in size of the vertical structure on the upper levels, the plans are punctuated by numerous double height voids.
The library buildings space is therefore defined by opaque and transparent closures as well as the support system.