WritingsThe Trellick Tower: The Fall and Rise of a Modern Monument

Recalling his first job experience, a certain gentleman still remembers the horrified faces of his friends after revealing he was just about to start working at Ernö Goldfinger’s architectural firm. In retrospect, he admits, it was pretty much like the reaction of the peasants to young Harker’s sister when he announced that his brother was going to visit Count Dracula.

Few architects, if any, would earn as much public loathing as Goldfinger during the 1960s and ’70s, and it is not by chance that Ian Fleming’s villain was named after him.

Hated for his short temper as well as for his architectural production, Goldfinger – who was a lifelong marxist who practiced in Perret’s atelier – embodied the last phase of heroic, utopian modernism and experienced its subsequent fall in public opinion.

The socialist utopian ideology associated with the Brutalist style was a perfect fit in the context of the British post-war housing shortage, and the development of high-rise buildings in the relatively flat London boroughs was initially touted by the government as a modern, forward-looking solution. If high-density housing was the setting, then concrete was to be the protagonist. For two decades, practicality had been aesthetics: being economical, flexible and indestructible, concrete became a metaphor for “the future” and acquired enough respect to be emphatically exposed on the façades of large buildings.

Starkly aggressive, with its thirty-one floors towering over a low-rise neighbourhood, Goldfinger’s 1972 Trellick Tower in London is a tragic syntax comprising raw concrete, deep shadows and sky bridges evoking the purified silhouette of a mediaeval castle. With its uncompromising materiality – which inelegantly quotes Le Corbusier – the tower is a daring presence in London’s post-war landscape, an expressionistic monument for the masses.

Commissioned by the Greater London Council to design a high-rise block in North Kensington, the architect deliberately adopted the latest scheme of the Balfron, an apartment block he had realized in 1967 in London’s Poplar neighbourhood, but eliminated the problems he had experienced while living there for two months. The two buildings appear almost identical except for small details. Four storeys taller, the Trellick Tower features a more elegant and lighter service tower containing stairways, elevators and a boiler room that links the main structure to a lower perpendicular slab. Both buildings feature dramatic, bridge-like walkways every third floor to connect an apartment tower with a service structure. There is no doubt that the void resulting from the separation between the two elements will stand as Golfinger’s real masterwork, and it is a powerful architectural legacy.

The Trellick Tower is completely consistent with the author’s vision of architecture as an art of enclosing space, or “work that is only appreciable from within”. Behind the stark surface of the industrial-age fortress are a variety of 217 mixed housing units provided with amenities, warm cedar detailing, a skilful use of colour and “communitarian” paths in the sky. Here the scientific approach of functionalist architecture gets softened in a totally comfortable and even “romantic” environment.

Yet by the time local authorities started associating technical and social issues with high-rise blocks, and particularly after the 1968 Ronan Point disaster (a twenty-two-storey building in East London collapsed, killing four), public opinion increasingly turned against high-rise apartments. Media criticism rapidly ensued. Even before it was completed, the Trellick Tower’s fate was already sealed.

The vandalization of the building preceded its opening. After somebody opened a fire hydrant on Christmas Day, flooding the lifts with water, blowing fuses and cutting electricity, heat and water, things started to go downhill. Stories spread about rapes in the elevators, assaults on children, drug smuggling, racial tension and a complete lack of control over the main entrance, giving the tower a very poor reputation: Goldfinger’s work was destined to epitomize the fear associated with the high-rise apartment buildings.

Unyielding as ever, however, the architect blamed the inhabitants, mismanagement, poor construction and inadequate maintenance for his tower’s misfortunes. One famous quote summarizes his attitude: “I built skyscrapers for people to live in there and now they messed them up. Disgusting.”

Many saw in the Trellick Tower a rather explicit inspiration for J. G. Ballard’s 1975 novel High-Rise, a tale of a degeneration into violence and the abandonment of social restraints of an isolated community of 2,000 people living in a London apartment building. The writer, who used to hang out in North Kensington during the 1970s, seems to borrow several features of the Trellick Tower throughout his narrative, from the building’s balconies to its skybridges, and from its “concrete landscape” to certain technical features (e.g., air-conditioning conduits, elevators, garbage-disposal chutes and electrical switching systems). However, every single facility that should have made the building a machine à habiter, actually turned it into, in Ballard words, a machine for war: glasses are thrown from the balconies of the upper floors, elevators and lobbies are occupied and fire doors are turned into barricades. Anthony Royal, the architect of the building in the novel, is a cynical character who deliberately designed it as a personal social experiment and resides in the penthouse. Ballard interprets the tower as “a huge machine designed to serve, not the collective body of tenants, but the individual resident in isolation”.

Even if there is no real proof that the high-rise described in the novel is the Trellick Tower, Goldfinger’s building certainly had a privileged place in the media and in popular culture more generally – it was condemned by conservative newspapers for its alienating, dehumanizing qualities, it was cited in disaster movies – and by the end of the 1970s the building had already been baptised “The Tower of Terror”. 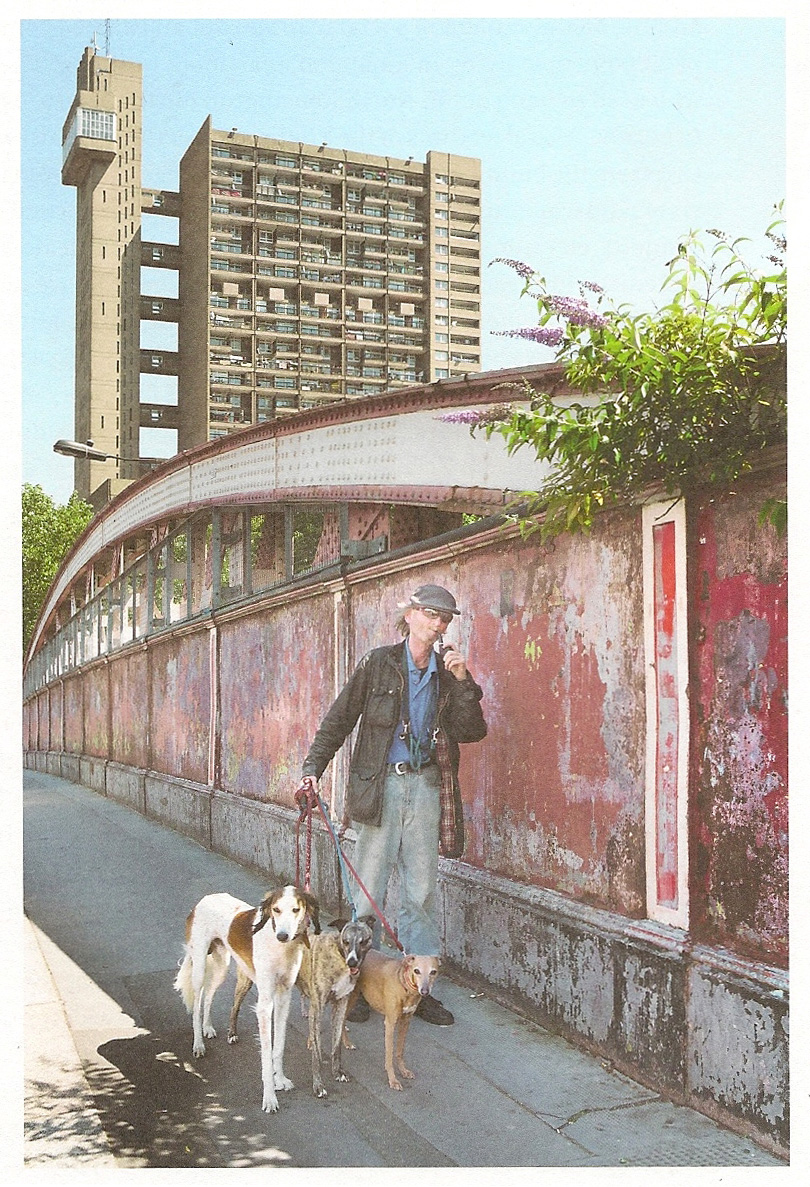 For right-wing newspapers and the Tory party, Brutalist housing projects – and, of course, the most representative of them all, the Trellick Tower – were a standing reminder of a period when local government in London flirted “dangerously” with socialist ideals; it is no wonder that they kept harshly underlining and exaggerating any social and technical issue associated with them. This widespread negative campaign was accompanied by the significant decay of most of the high-rise blocks built after World War II, as maintenance and the integration of security systems had not been taken into account during their construction. Council estates were generally portrayed very negatively, and it is frankly difficult to dissociate the brutal reality from dark ideological depictions. Despite the fact that it had been doomed to demolition, however, the Trellick Tower survived. During the 1980s things started to change, and the tower’s living situation significantly improved. Security systems were incorporated, a concierge was put in place to prevent non-residents from entering and closed-circuit TV cameras were installed, providing round-the-clock monitoring. Then in 1986 a radical policy was introduced: the building’s flats were to be sold only to those wanting to live in them. The resulting demand was astonishingly high, and as soon as some flats went up for sale, there was a long list of those willing to buy. When new tenants’ associations started to lobby for – and obtain – building improvements (such as new lifts, a new playground and new water heating systems), a sense of civic pride in the tower increased, and as a result public criticism of the tower began to be considered politically incorrect. The coup de grace that definitely defeated those who wished to tear the building down happened in 1998, when the tower earned a Grade II listing status, a recognition given to buildings that are of special interest and warrant preservation. As the tower’s price per square metre rose and its crime rates plummeted, the media pendulum started swinging back in the tower’s favour. Gone were the days of the old Ballardian crime-ridden claustrophobia: instead of playing up the tragic brutality of life in the tower, periodicals printed columns of its “real London” atmosphere. Both the city’s youth and its trendy elite had been given a brand new icon: featured in a number of music videos, the Trellick Tower has now become a merchandising cliché, one of Damon Albarn’s fetishistic references and a frequent setting for movies. Today places with an aura of urban decay are used to promote musical groups and casual apparel brands. The Trellick Tower’s image is exploitable precisely because of its edgy past, for its memories of past violence have turned into a sort of hip feature.

And so the inverted parabola seems to have been completed: just as Notting Hill gentrification has increased, so the tower’s “street cred” as a bygone den of crime has turned it into an object of desire for a trendy cultural elite, a fashionable image of an anaesthetized ghetto that is no longer dangerous.

But if there is one thing to learn from the Trellick Tower’s story, it is that we have never come closer to dystopia than today. If one were to rub off the happy-go-lucky patina that sells well in real estate agencies, one would rediscover the gritty reality that many of London’s council estates are soon likely to face: as land prices rise due to speculation, local authority housing will probably no longer be tolerated on high-value plots. As a result, such structures will most likely be demolished. Incapable of covering the rising cost of rents, first the proletarian residents and then the middle-class ones will be driven out of the city, and eventually the urban center will be turned into an oversized gated community. It should come as no surprise that many of London’s 1970s council estates are increasingly being featured as settings for dystopian movies and television series, like 28 Weeks Later, Children of Men and Misfits: as empty concrete shells devoid of residents, they seem to offer a vision of things to come.

To borrow Martin Amis’s words,(1) it is in fact the whole city, not just Ballard’s high-rise, that will one day “take on that quality common to all Ballardian loci” by becoming “suspended, no longer to do with the rest of the planet, screened off by its own surreal logic”.

“Many saw in the Trellick Tower a rather explicit inspiration for J. G. Ballard’s 1975 novel High-Rise, a tale of a degeneration into violence and the abandonment of social restraints of an isolated community of 2,000 people living in a London apartment building” (…) Ballard interprets the tower as “a huge machine designed to serve, not the collective body of tenants, but the individual resident in isolation”.