A borderless pavilion:  colonizing space through  Density and Dispersion

Based on the idea of a series of minimum and multipurpose infrastructural elements for a process of progressive colonization, the project fosters the idea of immateriality and autonomy through an expanded pavilion without walls.
Opposed to the need for an affirmative monumental structure, the project is not iconic but explores the potentiality of the site through minimal, multiplied interventions. It involves both the individuality and the collective and it respects the site while occupying it entirely.
The concentrated and then dispersed infrastructural elements are distributed not only on the original site of the 2002 Arteplage, but also in the territory beyond it, embodying the idea of the absence of limits and the blurriness of today’s material reality.
The pavilion is generated by density: in the central part of the site, the multiplicity and connections between elements «slowly» shape spatial limits.
Moving far from the main site , the elements, isolated, appear as a module of (empowered) street furniture, supporting activities in the rest of the expo as well as in the town of Yverdon-les-Bains, in the countryside and even in the lake. The single elements, though, remain always recognizable as part of a general network.
The project involves an experiment in collective living, which takes to its extremes the foundational theme of the arteplage project (Me and the Universe). The elements are, in fact, energy accumulators and producers for urban and communitarian life.

The pavilion ideally accompanies the contemporary, worldwide «Occupy» spontaneous actions while questioning the meaning of an expo in today’s society. Historically, the expos have provided the setting for the display of technological innovation. This one proposes to the public a plausible (yet utopian) alternative in ways of living in a collective and productive environment in times of crisis.
Representing a conceptual bridge through time, the project is an update of those 70’s counter-cultural elements which pervaded the original brief, as it embodies the idea of network and communication which might today provide real opportunities for utopian movements to meet reality.

Moreover, it represents an interpretation of the 2002 «Blur Building», as it vanishes the limits between the expo site and the pavilion itself, the lake and the ground, the built and the natural areas, the ephemeral and the everlasting. 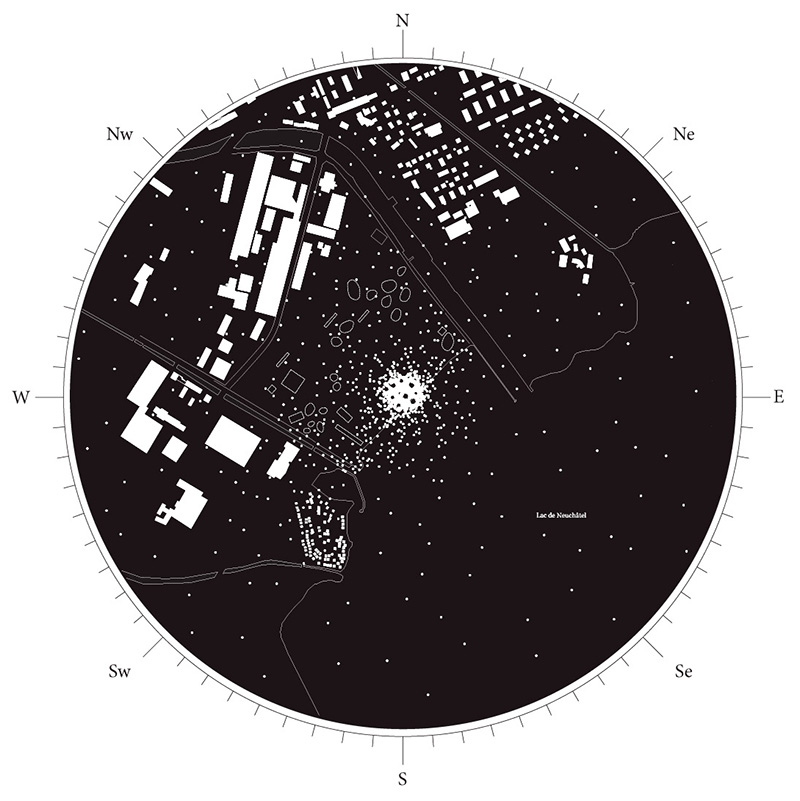 Enlarged Master plan. Map of dispersion of the elements in the surrounding territory 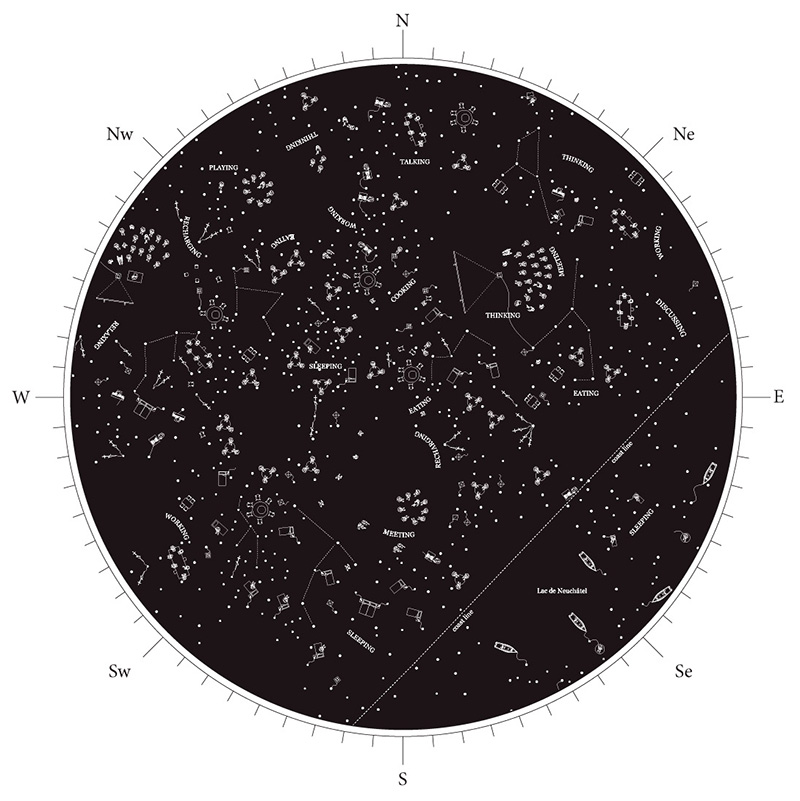 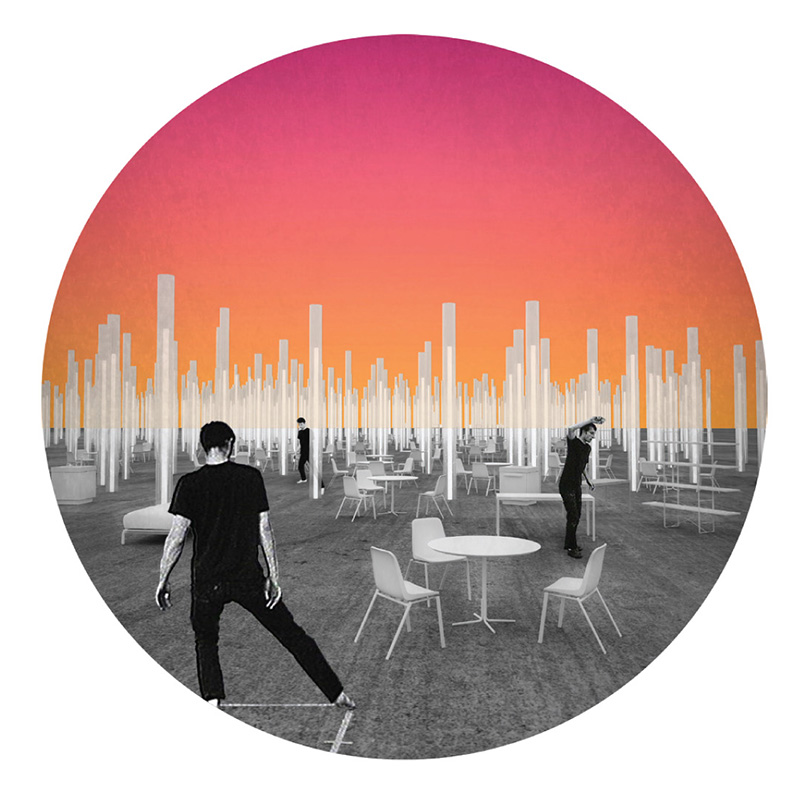 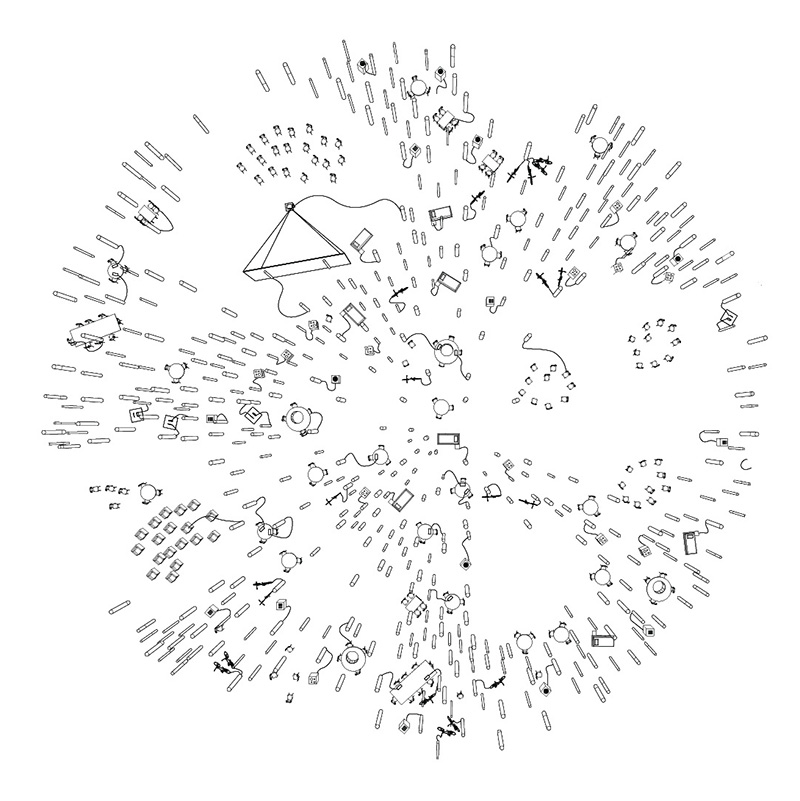 A domestic universe and an urban occupation

Inspired by Mikhail Okhitovich and Moisei Ginzburg’s concept of disurbanism, an abandonment of the metropolis in favour of a diffuse, partly agricultural but technologically advanced network, the pavilion promotes the revitalisation of the surrounding landscape.

Starting from the idea of a dense and complex urban settlement, it operates a slow process of disintegration of the built environment, to leave only the (material and immaterial) infrastructual network (process of disurbanization). The streets disappear in favour of light mobility, the buildings leave space to a free territory.

The result is a reduction to the basic elements of the contemporary urban and domestic living, excluding physical hierarchy, where the technical installations, lighting and communication devices become the main structure for the support of human life in a diffuse environment. Boundaries between the natural and the urban are cancelled, everything resolves in an isotropic field of conditions.

A territorial infrastructure: variation of intensity

The extended pavilion plays on the absence of limits and considers the urban, suburban and natural landscapes as an undifferentiated field of action.  The intensity of distribution, though, varies in relationship to the distance from the centre of the expo site. The single elements may take different meanings while situated in connection with different landscapes. 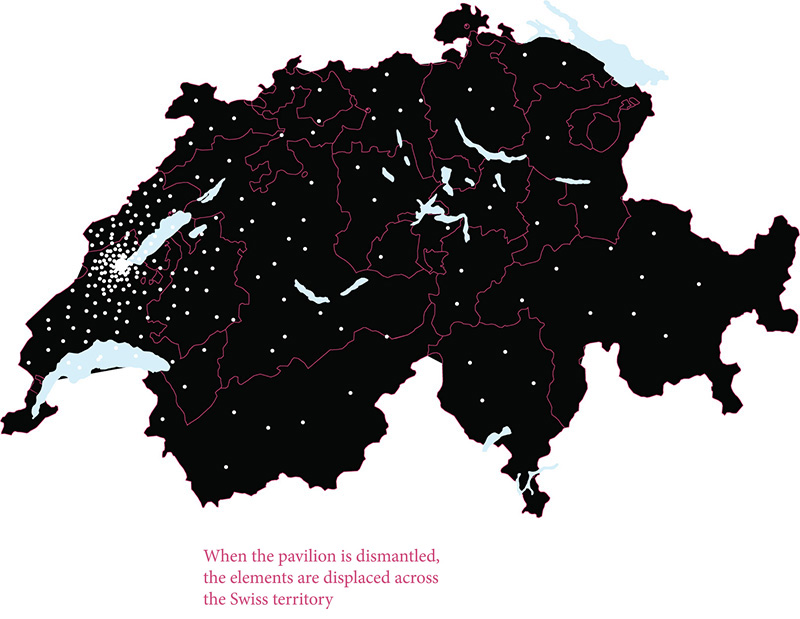 Autonomy from the main power grid :  inhabiting an energy  landscape

The minimal entities which constitute the dispersed pavilion are energy generators connected to different, renewable power sources.
The system is made up by the combination of different types of generators and the energy produced is used on site to feed different activities and promote the inhabitation of the area. Their ability of producing energy (instead of only distributing it), makes the system an alternative to the main power grid, autonomous because self-sustained.

When the expo gets dismantled, the single elements can be used to provide energy for the surrounding environment, distributed into a larger territory, further dispersed in the town and Swiss countryside. As the original Blur pavillon disappeared leaving no traces, this one will be dissolved but not erased as the single elements will be reused elsewhere.
The energy infrastructure embodies two different paradigms of inhabitation described by Reyner Banham in his essay «The architecture of the well tempered environment»: the energetic and the physical. By the production of heat, light, electricity, the elements feed the basic need for inhabitation from an energetic point of view, yet as their density increases they provide spatial borders that enable privacy and a physical support for roofs or shelters.
As the borders of the pavilion dissolve, the porosity of the system allows a continuous and progressive flowing and superposing of different uses, an overlapping of the private and public, a recomposition of the ways of occupying a site which becomes an experimentation in the concept of inhabitation.

A material infrastructure /an immaterial cloud

The minimal units are a synthesis of several infrastructures: not only they produce energy but they are also servers, physical platforms for cloud computing, connected to mobile communication which allows ubiquity. The pavilion has a double nature: a physical interface, and an immaterial one, which corresponds to a cloud for sharing informations and data as well as using online applications and collaborative programs. To the alternative energy grid corresponds an alternative information grid.

The pavilion’s cloud is used in the expo and whenever someone wishes to access to the pavilion servers from elsewhere.
This technology is another jump through an age of dematerialisation which allows to use online software and data storage as a result of a collaborative effort and of the sharing of resources. Reproduced in multiple fragments, the physical components of the pavilion are scattered across the territory, their impact as a cloud is distributed all over the world.

This community cloud is used to promote collaboration works and exchange, it supports activities in the Expo as well as augmenting its communication impact on the exterior world and it’s an open alternative to corporate-owned social networking and computing clouds.

To the idea of minimal infrastructure and essential living is linked one of communication technology, mobility and networking in a territory shaped according to the principle of maximum freedom, ease and speed of communications. 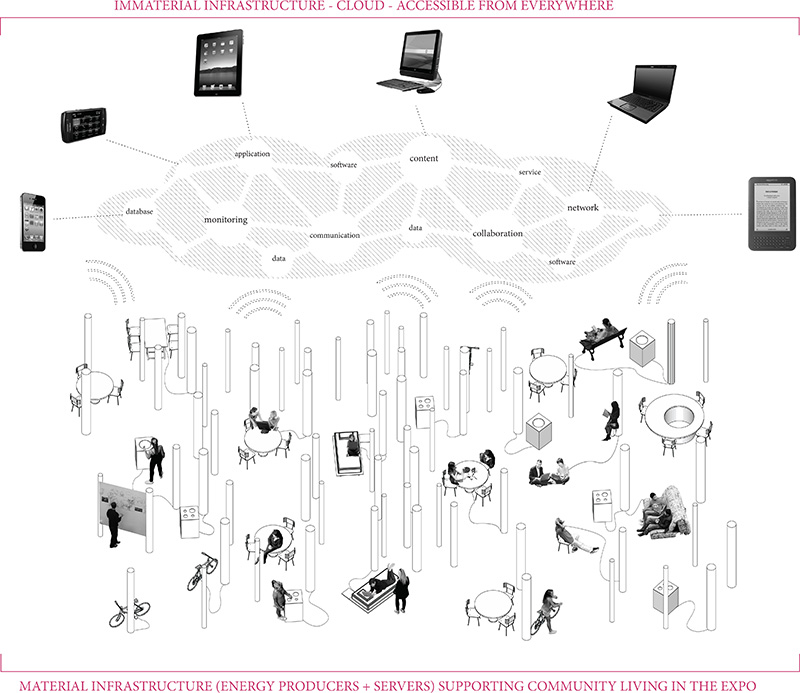 An experiment in community living

The indifferentiation of the basic elements, distributed randomly as trees of a forest and providing always the same conditions, encourages informal modalities of occupation which might evolve through time, following the needs of their users.

The elements provide energy for an electric bikesharing system, computers charging, evening lighting, projecting devices, cooking facilities and so on. Integrating facilities for communication, public speaking and performing, they identify a meeting territory, a place for shared, progressive activities for the whole population, as well as for private occupations.

The elements are a first sign of utopian settlement, where the condition of occupation are reinvented; there’s no hierarchy among living and working areas, nor between exterior and interior or collective and personal.
The whole territory of the expo and beyond becomes an indifferentiated field of possibilities questioning urban and domestic space while blurring their territories.

The users, from passive visitors, become part of a multitude engaged in the creation of a community.

Overturning the sense of an Expo as a showcase of products, the 2012 Expo becomes an opportunity for the Occupy movement, the 99%, to physically explore the possibility of a different society with new rules of cohabitation.

Sharing means and resources as well as space and energy is just the starting point. A different relationship with the surrounding territory and the environment, not denied or destroyed, is a background condition for this experience.

The pavilion seen from the lake

PROJECT EXHIBITED AT LAUBA IN ZAGREB (2012),
AT THE STOREFRONT FOR ART AND ARCHITECTURE, NEW YORK CITY (THE COMPETITIVE HYPOTHESIS 2012/13) AND AT THE KOTOR ARCHITECTURAL PRISON SUMMER SCHOOL 2013