The project (Second prize of Europan 2010) consists in semidetached houses with various surfaces, ranging from 50sqm to 120sqm, including different types: from 1 to 4 bedrooms or multipurpose and undetermined spaces.
The site lies in a relatively steep stripe of land, slanting from the Vuoreksen Puistokatu avenue (on the west) to the south-east natural environment; providing the future entrance to the Virolainen new urban development. 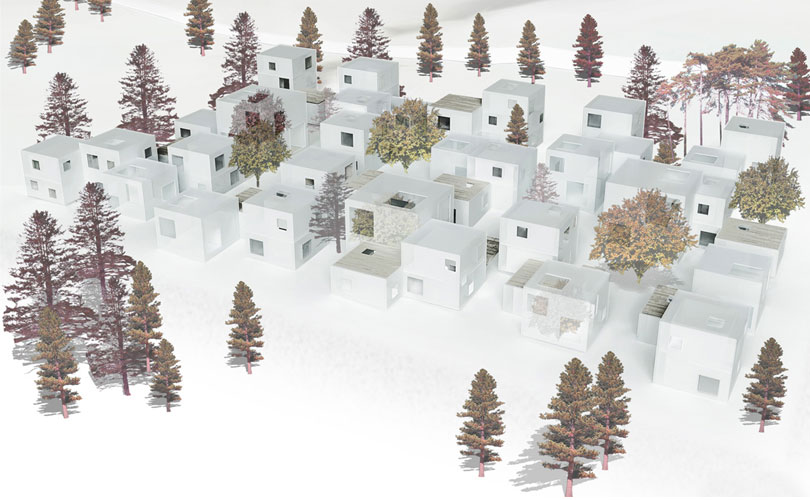 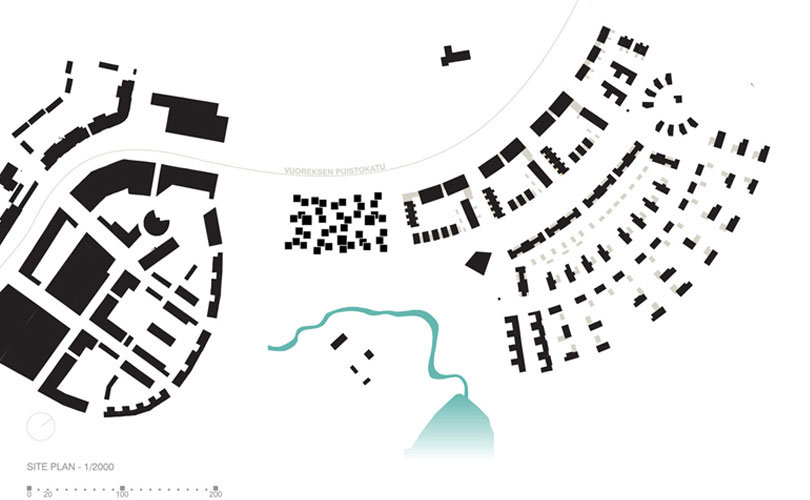 The plan configuration allows nature to flow through the houses: no clear boundaries are established between the block and the surrounding natural fields; pedestrian and bike paths are in permeable materials, the soil allowing the flows of rain water through it (percolation).
The whole neighborhood is thus conceived in continuity with the environmental area, the houses lying among the same conifers of the near forest. 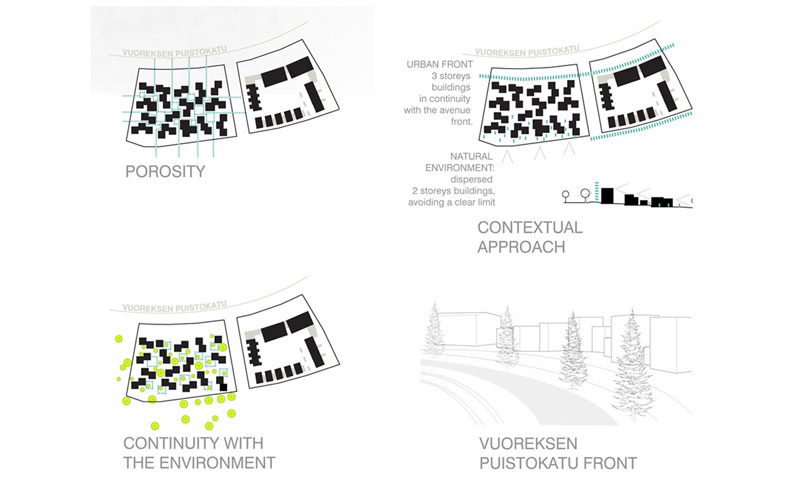 The conceptual process starts from subdividing the programmatic surface into square units of 7,5m of length, thus defining a regular grid.
Three larger blocks (10m), which host peculiar neighborhood activities, are then inserted: they act as polarizing elements which produce a new equilibrium, determining the various arrangements of the single units. Small groups of two, three or four units get associated to become different types of dwellings. 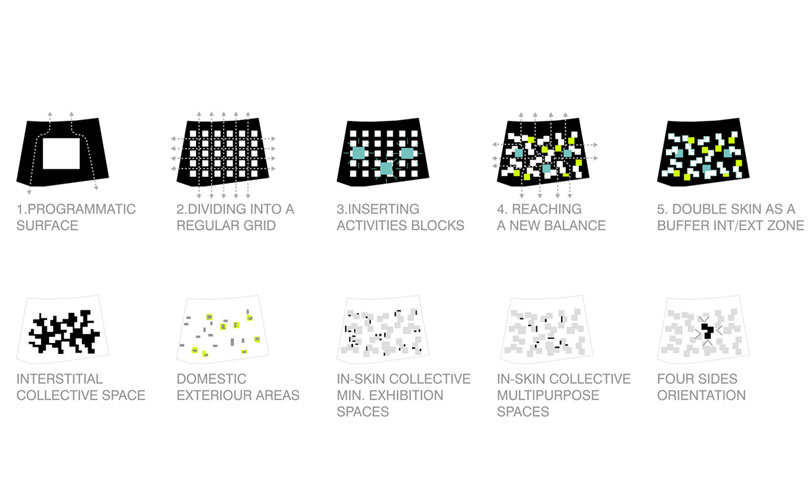 The peripheral walls of every house become conceptual and physical double skins, integrating two different levels of insulation: an inner skin (the house structural core), constituted by opaque Poroton® hollow bricks, providing a first level of thermal insulation through Perlite® infills; and an outer skin of translucent Polycarbonate containing Nanogel®, in order to get a complete insulation.The definition of a peripheral livable double skin produces variations of temperatures and humidity within the domestic spaces: here the research for efficiency is taken as a tool for designing the interiors and the exterior spaces at the same time and for reshaping their logics and structures, improving their livability. 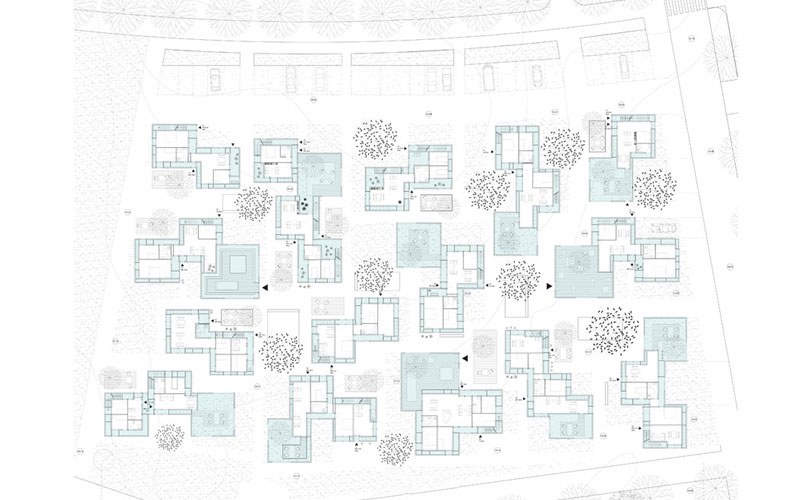 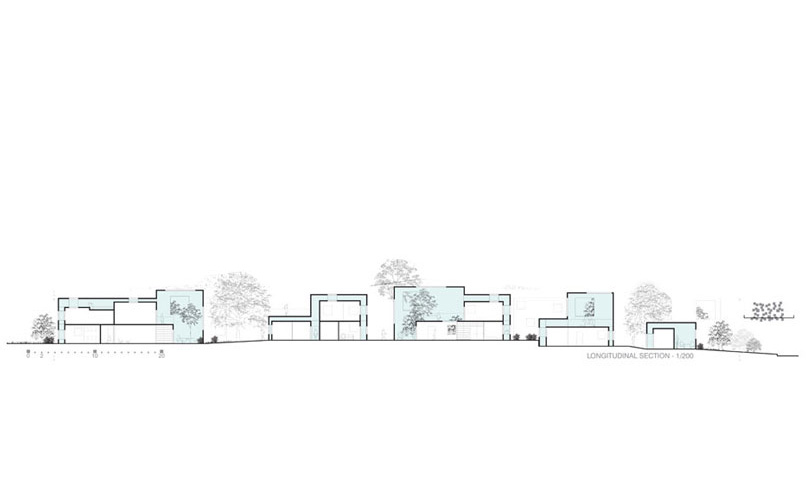 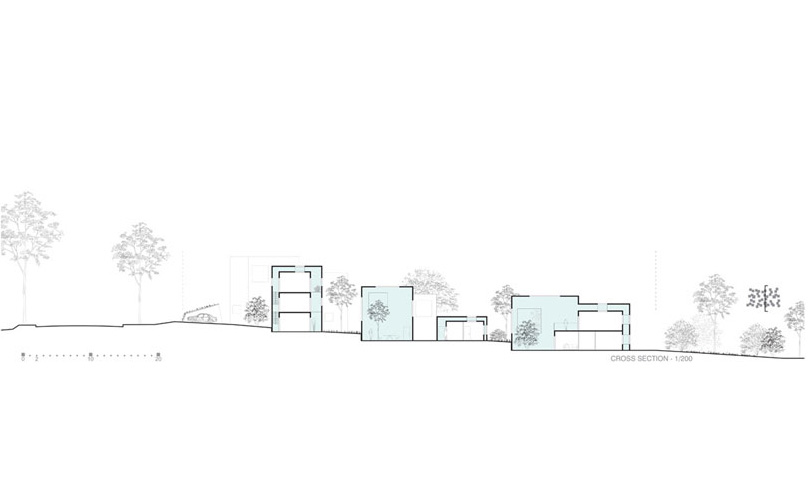 All the buildings are of high energetic efficiency while no special technology is added. The typologies themselves are rethought to reach a minimal thermal dispersion (passive houses) and optimizing the temperature in relation to the needs of the single spaces. 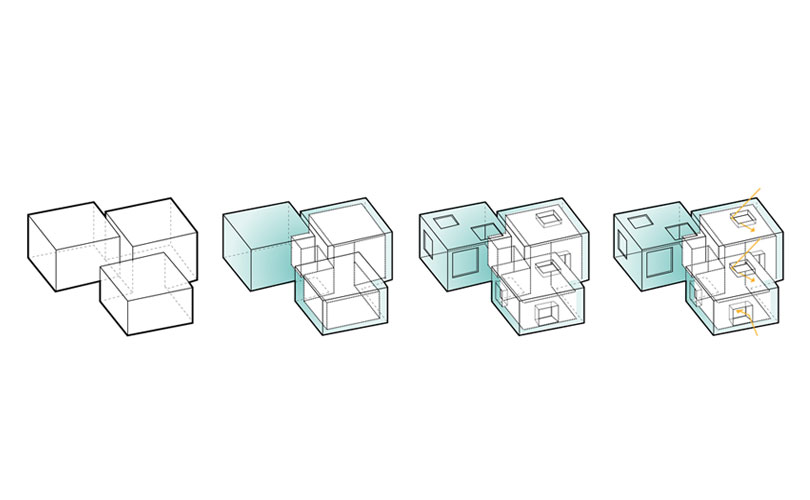 The distance between the inner and outer surfaces is large enough to host inhabitable areas. This space acts as a buffer zone: it thermally insulates the rooms inside from the cold and at the same time it creates unusual domestic ambiances within the house. 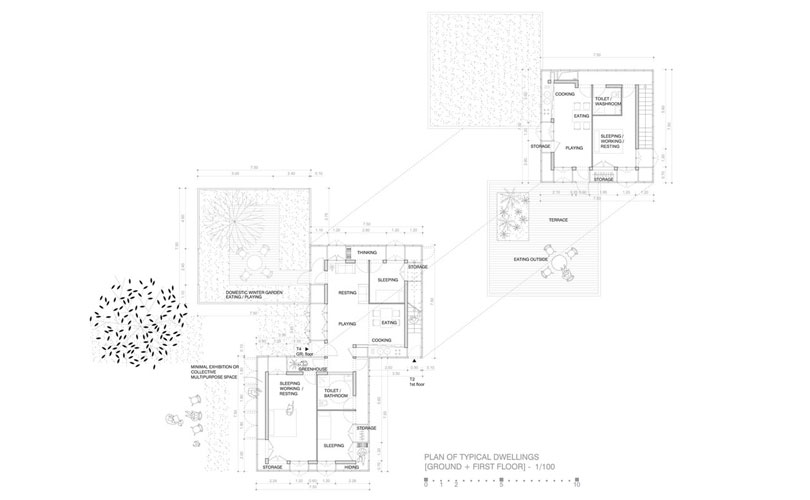 In-between the double skin one can find the elements of the house which require a lower level of warmth, like storage rooms and closets, staircases, corridors, or even a winter garden, an atelier, a mini gym or a space with no specific function (or whose function has to be invented by the inhabitants). Here the double skin loses its original technical purpose to become a real tool for defining, adapting or generating space. 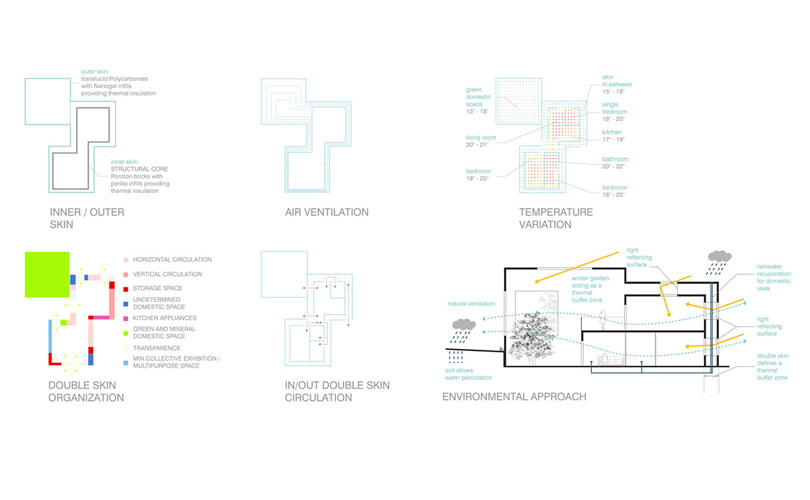 Staying outside, inside the house

The double skin is often enlarged to host winter gardens; those spaces give the possibility to enjoy «staying outside» even when the weather is cold, it rains or snows. The outside layer of the skin, made of translucent polycarbonate with high thermal performance, allows a great light diffusion while the soil inside lets plants grow. Big windows can be opened to let air flow through and direct light come in when wanted.
The winter gardens can be used as ateliers for artists / exhibitions places and can be opened to the public in different moments of the year, letting the sequence of the public open spaces change all the time. 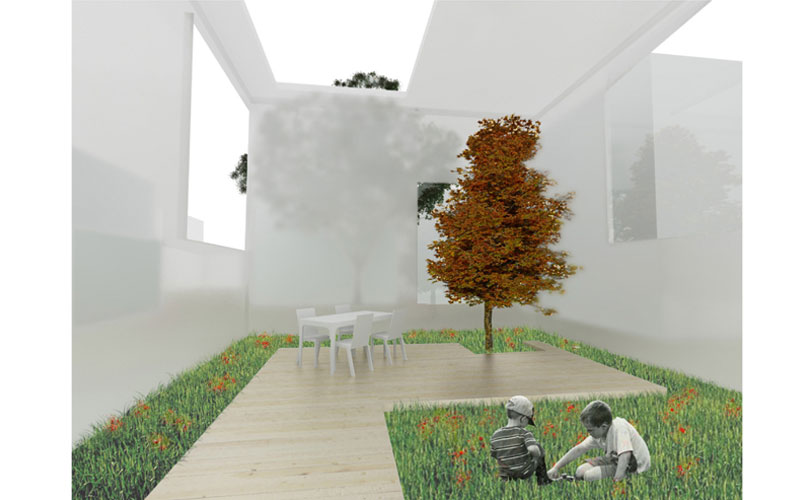 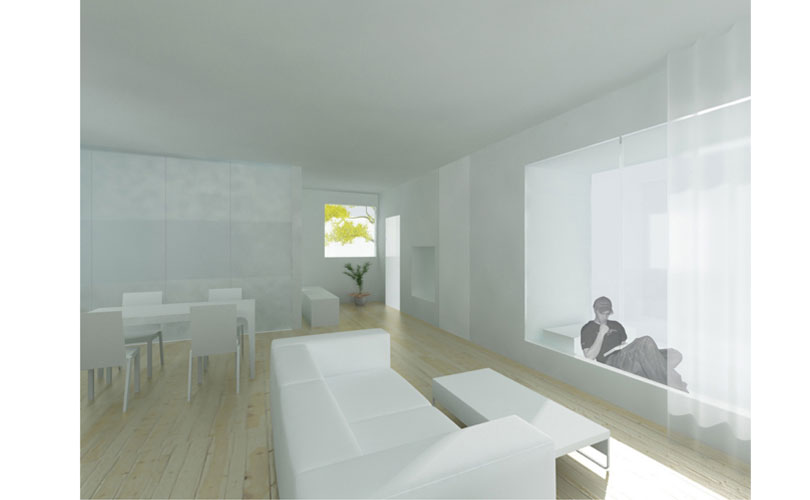 The fragmentation of the plan and its multi directionality gives place to a continuous slightly hierarchized collective space which adapt its shape flowing through the neighborhood; it opens in small squares through pedestrian, bike paths and community gardens, always allowing to choose different directions from each point.
There is a constant interaction between the domestic space, the urban space and nature, terms that interfere one with the other through the whole project. Nature infiltrates the inner space through the winter gardens, while the outdoor squares get a domestic scale and the wall of the houses give urban values to the network of collective spaces.

In collaboration with Didier Numanovic.